Home / Past and present / Riches beneath the earth

The river Mureș, which enters Remetea from the south, describing large curves that divide the village in two, is the largest river locally. On the right-hand bank of the Mureș is the Nagyrét bog, a 300-hectare area of eutrophic peat bog, in which rare species of plants have survived from the ice age. 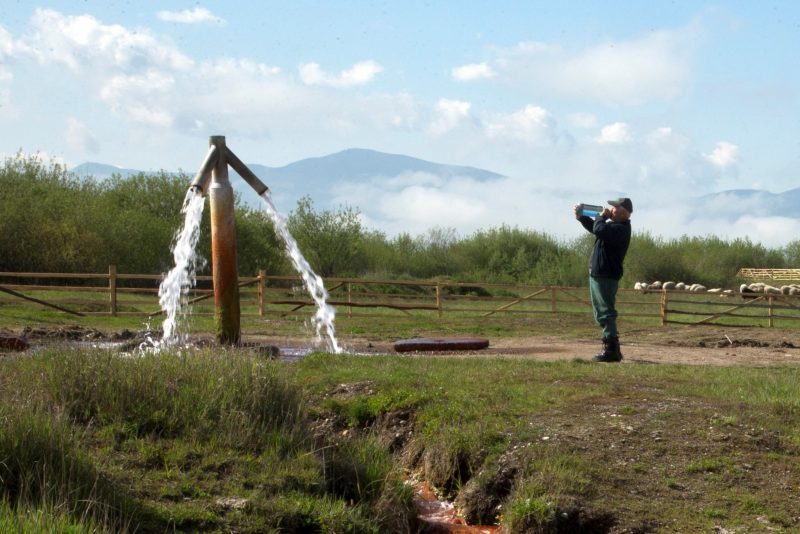 This is also the southernmost place in Europe where you can find the bridewort (Spiraea salicifolia) and the yellow gentian (Gentiana lutea). In 1980, four hectares of this land was declared to be a nature reserve. In this part of the bog, the peat is more than 3.5 metres in depth. Two protected plants of the Bogáros-Eszenyő bog, which is in the northern part of the village, are the snake’s head fritillary (Fritillaria meleagris) and the globeflower (Trollius europaeus).

In the conifer forests around the village, you might encounter wildcats, bears, wolves, and you can hear the call of the western capercaillie (wood grouse or heather cock). Sometimes, deer and wild boar come down onto the Nagyrét bog. In summer, on the sunny flanks of the hills, you can see many, many butterflies. Insect-eating birds (finches and swallows) and birds of prey (sparrow hawks or goshawks, and falcons) are part of the local fauna.   REMETEA’S MINERAL WATERS The magmatic hearth of the two enormous volcanic formations of the Gurghiu mountains – called “Fancsal” and “Bakta” – emit carbon dioxide which comes to the earth’s surface along the river Mureș, either in the form of carbonated mineral water or gas. According to the geologist Csaba Jánosi, the mineral water sources in the village fall into two categories, depending on how they originally emerged. The first category is that of man-made mineralwells dug specially for the purpose, such as the one in the centre of the village. The other category is of mineral water sources lying over the fault line along the river Mureș, where there are both natural springs and excavated wells. Some of the many mineral water springs in Remetea have been analysed. They form part of the group of waters with a high content of sodium, magnesium, hydrogen carbonate and chlorine.   REMETEA BATHS

The history of Remetea’s mineral water baths began in the 1880s when, on the land owned by the Mélik family, four mineral water sources close to each other were fenced-in. Water for bathing was heated in cauldrons. The first baths were destroyed by floods in 1913. In the hundred years that has gone by since then, the baths have passed through the hands of several owners, and have been re-developed several times. In the heyday of the Remetea baths, in the 1970s, more than ten thousand people were visiting each year. The mineral water springs in the area close to the baths contain sodium, magnesium, hydrogen carbonate and chlorine. Remetea’s mineral waters are recommended for the treatment of varicose veins, dermatological problems, rheumatism and cardiovascular diseases, as well as healing of injured limbs or chronic metritis in gynaecology. In 2010-2011, the Remetea baths project, as part of the “Mineral Water Road” [„Borvíz Útja”] project, received backing from the Ministry of Development and the Harghita county council. A modern treatment centre will be built nearby, as can be seen in the drawings.